The Support Action sought to build awareness around key themes on safe migration across 12 districts in Bangladesh that are facing high levels of irregular migration to the EU.

Specifically, the program aimed at: 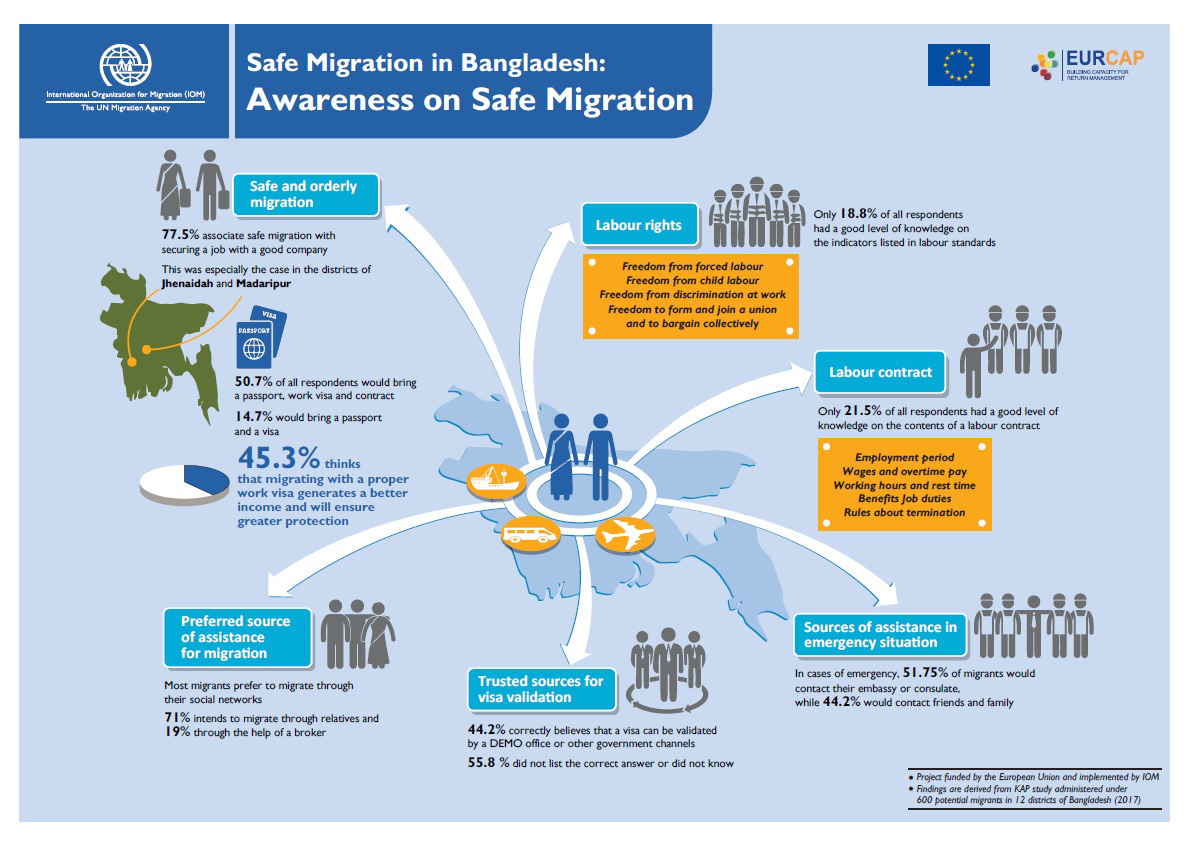 To guide the messaging of the campaign, IOM Bangladesh also conducted a Knowledge, Attitudes and Practices Towards Safe Migration assessment. Around 600 potential and returned migrants participated in the study, providing valuable data and information to inform the design of the campaign. The findings of the study showcased that the typical age of potential migrants tends to be 24-29 years old and the typical age of returnees, with potential to re-migrate, tends to be 30-35 years old. Interestingly, 70 % of the respondents planned to approach relatives for information to migrate abroad, and 54% trusted people who had migrated and had returned as reliable sources of pre-departure information.

This project resulted not only in positive changes in knowledge, attitudes and practise among Bangladeshi citizens on migrations issues, but also served as a tool to build dialogue on migration management between the EU and the Government of Bangladesh. To further support the sustainability of the results achieved, the surveys and the methodology used in the campaigns served as a basis for similar awareness raising campaign activities under the EU-funded project PROTTASHA, implemented by IOM in partnership with BRAC.  In addition, the findings of the surveys were used in a Study on best practices in irregular migration awareness campaigns carried out by SEEFAR, and provided input to making recommendations for future awareness raising campaigns on irregular migration.

This project was co-funded by the Swiss Agency for Development and Cooperation (SDC).

This support action aimed to enhance the capacity of the Government of Bangladesh to effectively govern the return process of migrants staying irregularly in the EU, with greater transparency and accountability, by launching the Returnee Case Management System (RCMS). Drawing inspiration from the system operating in Georgia (RCMES; funded by DG NEAR in 2014), it intended to support the implementation of the Standard Operating Procedures (SOPs) signed between the EU and Bangladesh in 2017 on the return of Bangladeshi irregular migrants from EU countries.

After successfully finalizing the deployment and testing of the RCMS in 2020, the platform was officially launched on 9 November 2020 to enable identification of returnees and facilitate their readmission in line with the SOPs. IOM Bangladesh also procured and implemented the Automated Fingerprint Identification System (AFIS), and associated Data Centre, facilitating the operation of the RCMS through fingerprint identification and relevant biometric databases to identify the nationality of returnees.